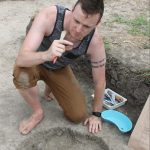 So, you’ve died. Now what? You could probably expect your family to turn your body over to a specialist, who will embalm you and place you in a casket. Then, your loved ones will gather at a cemetery with a holy man and say a few nice things about you before burying your casket six feet underground and putting up a tombstone with your name and age on it. We may take this processes for granted, but it represents a highly complex, codified burial custom that was developed over thousands of years. Now, imagine the challenge a future archaeologist might have in recreating and understanding what was done to your remains and why, using only your bones without a trace of anything written down for a clue. What would your burial say about your culture, your lifestyle, or the society you live in? How would it compare to others?

These are the questions we are exploring on the BAKOTA project. For me, it’s my first time in the field attempting to begin answering these questions while working backward. Here in Eastern Hungary, in the Körös River region, researchers are investigating the cemetery site of Békés 103, whose urn burials we hope to provide insight into the relationship the Bronze Age people in this region had with the dead, and how their mortuary customs reflected a society that was changing with new technology.

This was a society that lived in the center of cross-continental trade routes, adjacent to a wealth of natural resources, and in contact with cultures that were intensifying in the stratification of their social systems based on access to material wealth and knowledge—yet they seem to have remained consistently egalitarian.

So far, archaeologists of the BAKOTA project have determined that most of the burials are strikingly similar: the bodies received a simple cremation and were deposited in simple, otherwise empty clay urns and buried in shallow graves. The uniformity of the burials can be a major clue that tells a story of a society that either valued equal treatment of all members in their society, or an absence of a formal hierarchy—or at least, equality in death. But were they really so equal? My project attempts to address this question.

The primary means of gathering data for my project involves scoring samples of bone fragments for their fractures and warping. Fractures and warping caused during the cremation process can be a distinct indicator of the nature of the fire that caused them. By counting up the number and type of fractures for each burial, I’ll have a baseline to compare each burial to the others. Differences in the ratios of fracture types can provide the first clues that some people were treated differently than others in the funerary custom. Primarily, I am identifying significant relationships between this data and sex, age, and spatial distribution in the cemetery of individual burials.

The significance of discrepancies in number and type of fracture and the presence or absence of warping is twofold. The most important factor relates to the chemistry of what happens to bones when they are burned. Differences in the factors I mentioned can reveal the biological condition of body tissue at the time of burning, as well as providing clues as to the amount of energy that went into burning a body, expressed by increased heat and duration of the cremation. Additionally, fracture data could provide evidence of leveling of handling of the remains after they were burned. 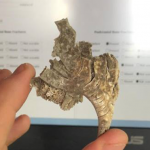 A statistically significant relationship between a demographic category or location group with a prominence of certain fracture types or warping could begin to provide evidence of social stratification. Alternatively, the absence of a relationship would also be a significant finding–a conclusion promoting the existence of horizontal society that would reinforce what we already think about the people who lived in this region. A better understanding of the cremation process used by the people of the Békés 103 will be valuable for the BAKOTA project as we strive to unearth their cultural and mortuary practices. Are the identical graves misleading, and did they give special treatment to certain individuals before placing their remains in urns? Did this culture remain socially egalitarian through the Bronze Age while their neighbors formed hierarchical societies? Hopefully, my research can provide another step toward answering these questions.

For more on the BAKOTA project’s research on bone fracture:

And for more on how to analyze burned bone:

← Level Up! – Exploring Skeletal Distribution in Cremation Urns
Burning Beyond Color: The Flaming Perspective of a Returning BAKOTA Student →