Chem-Mysteries of Bones and Plants

So, this year, I’m one of two students using chemistry to tackle some of BAKOTA’s pending questions. And the question that really my mentor, Dr. Julia Giblin, and I are trying to crack down on, is whether or not people were moving around in Middle Bronze Age Hungary, and if they were, to what extent? And we’re gonna go ahead and use some chemicals and really expensive plasma-making machines to figure this one out! 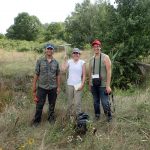 Unfortunately, all that really cool chem stuff where we turn bone into a super-hot plasma and use magnets to shoot it through a machine that tells us its chemical makeup (a Mass Spectrometer) can’t happen just yet. And even if it could, it wouldn’t really tell us much if we didn’t build an isoscape first. Isoscapes are like a sort of map where we can see the amounts of different types of isotopes. Isotopes are a type of atom that has the same properties of other atoms with the same amount of protons but are just a little heavier or a little lighter. Well in our case, our super useful isotope is Strontium! Strontium (abbreviated Sr) is a metal, and number 38 on the periodic table, and better yet, the isotopes of Sr we’re interested in (Sr-87 and Sr-86) are found in all sorts of different ratios here on Earth depending on where they come from. So I, and another one of the directors, Mark, and his student, Alyssa, have been driving around Hungary every now and then, and while they go and grab some clay samples for a project they’re working on, I go and collect a few samples of plants – pictures, coordinates, and all – to attempt to build an isoscape of Hungary which we can use to compare our bone data against, because plants uptake the ground Sr and are pretty good indicators of the Sr in the ground.

Ok, so I promise I’m about to tie it all together. So here’s how it works: for most of your life, some part of your skeleton is developing, and as you eat, whether its plants or animals, you take in the strontium – with the unique geographic isotope signature and everything – into your bones, where it stays for a very long time. So if you’re moving around while all these different bone parts are developing, you take in the Sr signatures into these developing bones, and we can tell where you were by matching the Sr signatures in the bones to those from the ground from what we found in the plants! And we do all this with the help of a machine called an ICP-MS (Inductively Coupled Plasma Mass Spectrometer) which reads out the amount of the different types of isotopes in a mixture.

And now, to answer the last standing question “Dante, why on Earth are you putting this much work into finding out if people were moving or not?” and the answer really is quite simple. Very little is known about the movement of ancient people in the time of the Bronze Age, especially those people coming from the part of the world Hungary finds itself in! Looking into the movement of people, and whether they traded or not, or if people from all over Europe were coming into the Carpathian Basin can tell us a lot about the movement of material culture, ideologies, and the emergence of societies that exhibit social inequalities, and all of this contributes to the understanding of the cultural heritage of middle European countries like Hungary! I hope you guys enjoy reading about how BAKOTA is going about solving some of these archaeological chem-mysteries!

← Burning Beyond Color: The Flaming Perspective of a Returning BAKOTA Student
Break a leg! (Or any bone, really) →