I have been working with the BAKOTA project since my freshman year in 2013, and I will be heading back for the third time this summer! Over the course of my time working with the project I have become particularly interested in the ceramic urns recovered from the Bronze Age cemetery that the team is excavating. Back in the lab at Quinnipiac University this year I have learned how to use spatial software (ArcGIS) to record and analyze characteristics of these urns. I recently presented a poster on my research process at a Sigma XI Student Research Poster Conference held at QU this past spring. Here is a brief synopsis of what I have been working on…

To start I did a lot of reading on the Bronze Age and specifically the Bronze Age in Hungary. The Bronze Age spans from the second half of the 3rd millennium through the 2nd millennium B.C. and is named for the period in which bronze metallurgy techniques (a metal alloy of copper and tin, copper and antimony, or copper and arsenic) were developed and spread around from Asia and Northern Africa throughout Europe (Visy, 142). It was a period of great expansion and change for prehistoric cultures, characterized by population growth, agricultural intensification and, in some cases, the emergence of social inequality.

Hungary’s geographic location in the Carpathian Basin made it a prime setting for cultural development and trade in Eastern Europe throughout the Bronze Age (Duffy, 2). The Danube and Tisza Rivers provided steady access to water, arable land for farming, and “superhighways” for travel and the trade of goods. The first appearance of the unique Bronze Age lifestyle can be observed in the southern Transdanubian settlements of the Vučedol culture. There was a commonality in craftsmanship when making tools and pottery that can be traced back to this culture and to that of the Pontic and the Aegean of where it first appeared. As cultures started to mix and cross paths techniques were shared and spread across the landscape (Visy, 141). In the Middle Bronze Age, there was a shift toward living on “tell” settlements where people rebuilt their houses on top of preexisting settlements creating a mound. This practice appeared along the Danube and in the Tisza Region (which is located in the eastern portion of Hungary). This settlement style was associated with small farming communities who excelled in agriculture and animal husbandry (Visy, 142). The material discussed in this study dates to the Middle Bronze Age 2000/1800 B.C. and is associated with the Gyulavarsánd culture. During this time period there was an increase in diversity of burial practices where both inhumations and cremations could be found, along with similar bronze and ceramic forms comparative across the area (Parditka and Duffy, 3).

Learning about the time period (Bronze Age) in Hungary and the geographic location set the stage for me to develop my own research ideas while working with the project. My research comes down to using spatial data from the site along with the detailed outlines of each burial to try and learn as much as I can from these characteristics. The spatial data used for this study came from a Bronze Age cemetery (site name: Békés 103) located in southeastern Hungary. The site is currently being studied by the Bronze Age Körös Off Tell Archaeology (BAKOTA) project. The BAKOTA project has excavated 61 burials and 30 features over the last three field seasons. During each field season a Total Station is used to record spatial information from all of the burials that are excavated. A Total Station uses Northern (X) and Eastern (Y) coordinates as well as Elevation (Z) measurements using an infrared laser that automatically calculates the information through a prism placed over the desired area (Sládek et. al., 16). These coordinate points (X,Y, and Z) are then downloaded onto a computer, where they are added into a Geographic Information System (GIS) computer program as a Geodatabase, which is used to store, analyze, and visualize spatially referenced information (“ArcGIS Main”; Price, 27). Using the ArcGIS program at the Center for Anthropological Research laboratory at Quinnipiac University, I helped create Shapefiles for each burial at the site. Shapefiles are a type of spatial file that can contain points, lines, or polygons; for this project I used polygons because I was creating outlines of the burial pits (Price, 27). Additionally, Shapefiles can be linked with an Attribute Table where any amount of information can be associated with that file including elevations, contextual information, and burial characteristics.

This process that I went through in ArcGIS can be outlined in a few steps seen below:

To begin, an initial ground layer is set to the location in Hungary where the burial site is located. 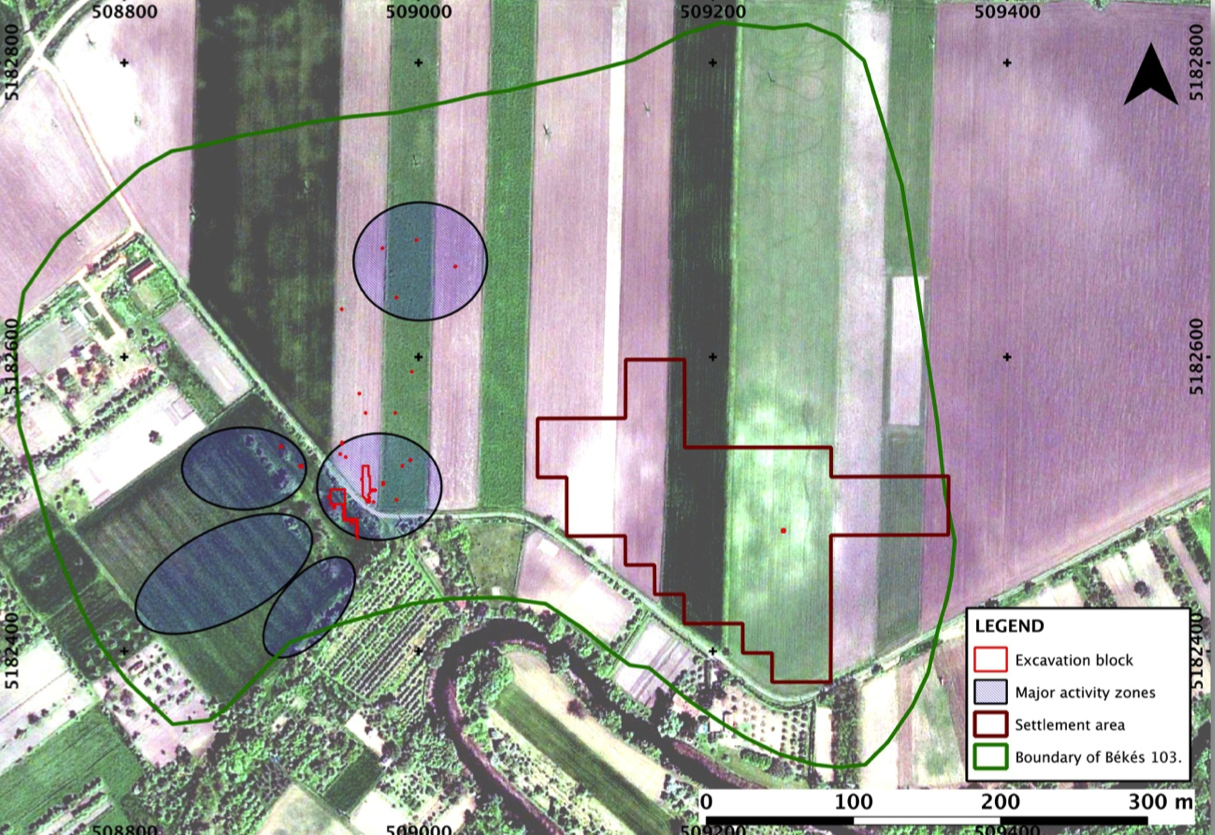 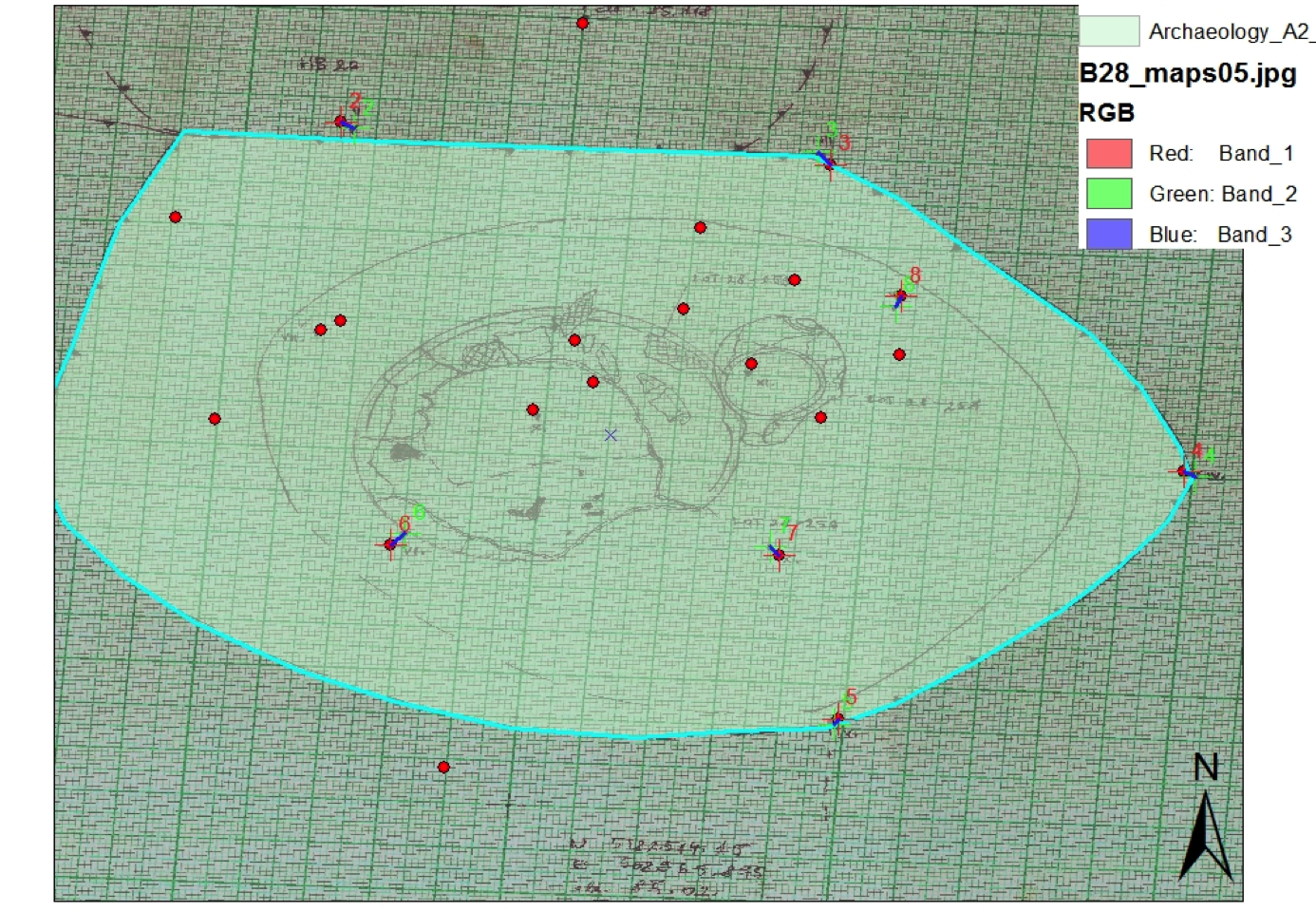 After adding all the layers and saving the edits to the Geodatabase I can open up the Attribute Table and add additional information that will be linked to the Shapefiles. This table holds all of the information (e.g. contextual, stylistic) for each burial or feature. 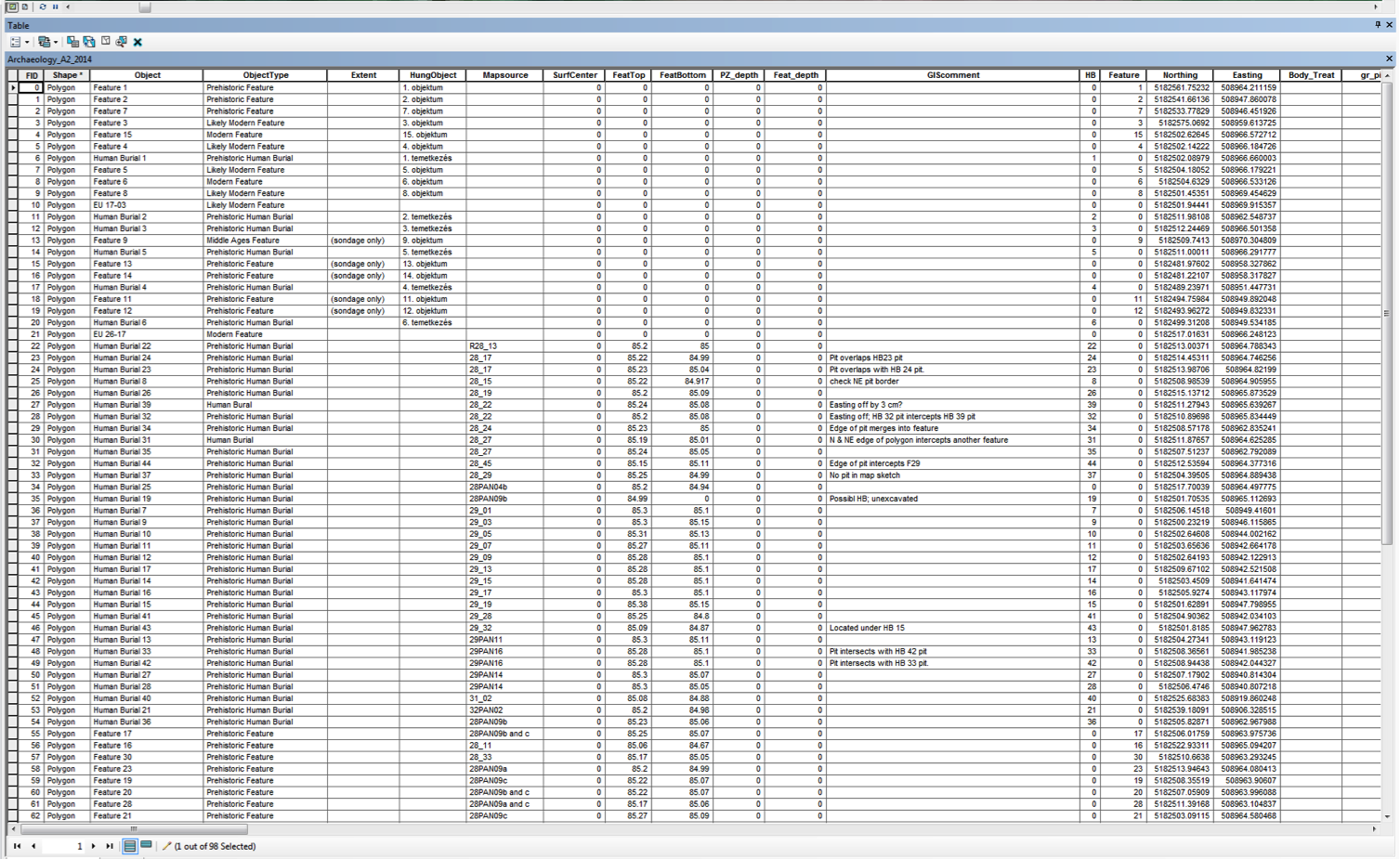 In the future, characteristics of the burials (recorded in the Attribute Table) can be visually highlighted in ArcGIS to look for patterns related to prehistoric behavioral patterns. 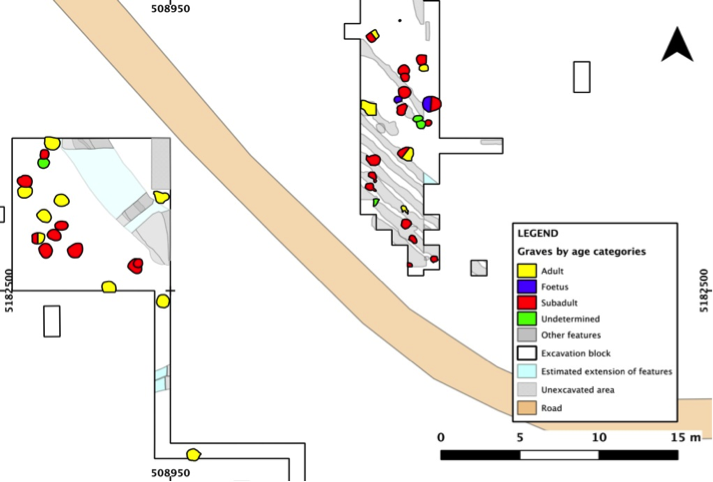 This project is ongoing and I plan to continue to update the BAKOTA Geodatabase with new information during the summer 2015 excavations in Hungary. Additionally, as the reconstruction and analysis of previously excavated burials is completed, I am adding that data to the Attribute Table in ArcGIS. For example, ceramic specialist László Gucsi has been reconstructing the vessels from past excavations. While in Hungary this summer, I will take measurements and record aspects of the stylistic features on each vessel and add that information to the Attribute Table.

When all of the data has been added, ArcGIS will be used to look for spatial patterns and relationships. Specific details (e.g., a certain type of decoration) can be highlighted (and visualized) in all of the burial Shapefiles that share that characteristic (see Step 5). I have several research questions that I hope to answer as I continue working with ArcGIS on the coding of burial details in the Attribute Table. Do the stylistic decorations on the burial urns vary spatially? Is there a spatial pattern to burials that have grave goods vs. burials with no grave goods? Are there correlations between stylistic characteristics of the urns and other variables (such as age, sex, size of urns, grave goods, etc.)?