~Greetings from your 2015 Block Captains!

The first week here on the BAKOTA project so far has been a very hot one, but also a great one filled with a lot of hard work!

Our job as a Block Captain is to act as a leader for our team of students and ensure proper protocols are followed within our blocks. Each captain has her own block and a variety of students to aid in the excavation process. In addition, one of our more important jobs is to keep track and complete all of the proper documentation for everything that goes on in our block. As things are just starting out, our job has been relatively straightforward, but as we dig, we anticipate things willl pick up quickly. Luckily for us, the co-directors are a wealth of information and always willing to lend a helping hand.

On Monday, we had our first official day in the field and conducted shovel tests for all of the blocks. Each 2x10m block had a total of 10 shovel tests that were staggered to hopefully give us a sense of what we may find underneath the surface. Once we determined the location of the shovel tests, we dug a small hole to collect 10L of soil. We then screened that soil to collect any artifcats. Many of the shovel tests revealed a number of small ceramic sherds, daub, burned bone, and some modern material.

The next day, a small backhoe came to the site to help us remove the ploughzone from the excavation units. We use this technique because the ploughzone is highly disturbed and the backhoe can move larger volumes much quickly than we can by hand with a shovel. As the backhoe moved through the block, Paul, Julia, and Györgyi kept a sharp and expert eye on anything that may have indicated a burial area. 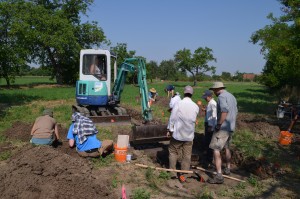 The backhoe first dug into Block 42 led by Dominika, the block captain. This block seems to have the highest concentration of burials. In this block there is certainly lots to do and see and we are excited to see what comes of it!

The backhoe then moved to Block 43 led by Anna. This block was not nearly as exciting as the previous, but still revealed a few interesting things. The one burial that was uncovered seems at first glance to be in rough condition. In general, the soil across the site is rather difficult to work with as it is predominately clay and dries out very quickly. We spent the majority of the next day attempting to scrape the bottom of the ploughzone away and creating a smooth floor for the block. As we are finding out, this is proving to be easier said than done. Over the next few days, we are planning to recover the known burial and hopefully we will uncover more as we dig into deeper layers. 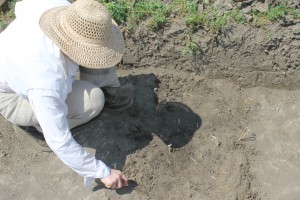 Virág using a spakli (Hungarian trowel) to clean the floor of the block.

Over in Block 44 led by Kimi, we are experiencing similar things as those of us in Block 43. We still have some more of the ploughzone to remove from the block, since the field has been ploughed for crops and the ploughzone here goes deeper than in other parts of the site. We found more ceramics, daub, burned bone, and modern material just like we did in the shovel test units in the soil the Bobcat removed. 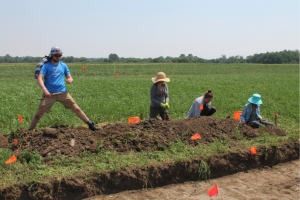 Over the next few days, we will continue to clean and scrape layers away from the floor of the blocks and eagerly await the discovery of a new burial! 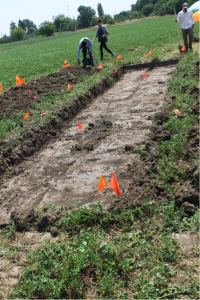 After we clean the block, we are going to continue to keep on excavating!

Fortunately for us, the weather is supposed to cool down a bit so we may be able to find some refuge from the sun’s beating rays. We are also looking forward to meeting with the students from the nearby site, Pecica in Romania!

We certainly have our work cut out for us for the next few days!