Hi! Were Anna Szigeti and Virag Varga! The two of us are doing a student project on the analysis of metals.

The Bronze Age Koros Off-Tell Archaeology (BAKOTA) Project is funded by the National Science foundation and spearheaded by Quinnipiac University. It works in cooperation with the Munkacsy Mihaly Museum in Bekes County. The goal of the project is the excavation of a Middle Bronze Age Gyulavarsand and a cemetery in Eastern Hungary located in a site called Bekes 103. In Hungary, the Middle Bronze Age lasted from around 2100 BCE to about 1400 BCE. This cemetery contains mostly graves from this era, but there are some Early Bronze Age and Late Bronze Age remains as well. 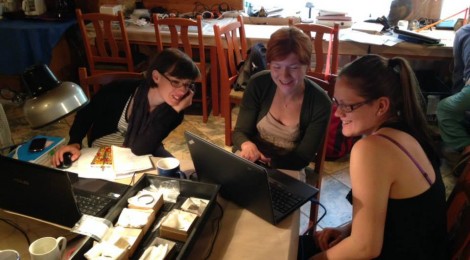 We got to talk to Viktoria Kiss, from the Hungarian Academy of Sciences, RCH, Institute of Archaeology, who analyzes metals. She is our mentor and helped us through our research by providing resources and advice on our paper. Gyorgyi Parditka and Paul Duffy also helped us.

We have worked together to try to analyze the metal finds that have come out of the excavations carried out by the BAKOTA Project in the past. There are a grand total of 18 pieces of metal that have been collected since 2011. This year, 3 more pieces were collected.

Of the 18 pieces previously collected, only 8 are from excavation units. Some fragments were found through surface collection that are far younger than the Bronze Age. Thats not to say they’re not interesting, though! One of the pieces we found is actually a Roman Fibula! You see, Bekes 103 is actually a multifaceted site. It has undergone multiple periods of occupation. Its been occupied during the Neolithic, Bronze Age, Roman Period, and Arpad Ages. Today it is farmland.

We spent time sketching all of the metal artifacts and analyzing them. Most of the bronzes were pins or bracelets. We tried to figure out what time period they were from and what they are. We were especially careful with the Bronze Age artifacts. For those, we looked at data from other sites, like Szoreg and Battonya, which were cemeteries that belonged to the nearby Maros culture. The people of the Maros culture lived at the same time as the people who used the Bekes 103 cemetery. Its possible to use the information gathered from the Maros Sites to supplement the information gathered from our own site. 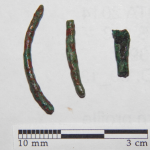 We also looked at where the bronze from the Bronze Age came from. The bronze fragments that came from in or around a grave indicate an area richer in bronze, as they mostly come from the same general area of the site. In particular, we were interested in whether they tend to be found with burials or just scattered around. As it turns out, there is a slightly larger number of bronze finds from burials. This is interesting, even though it is somewhat to be expected. This is because bronze is unlike materials used before. While there is a brief period of transition known as the Copper Age, where copper began to be used for jewelry and tools, the only truly useful raw material used before bronze was stone.

Humans and their ancestors used stone tools for millions of years, and so the advent of metallurgy caused major economic, political, social, intellectual, aesthetic and (to some extent) religious changes. Metals are vastly different from stone for one huge reason: they can be reworked. The same piece of metal can be reshaped and reused endlessly, while stone tools are chipped away until they’re useless. Also, metals are more difficult to obtain, so this increased their value even more. Because of all of this, metals weren’t haphazardly thrown away in fields. Placing metals in a grave was a very meaningful sacrifice. 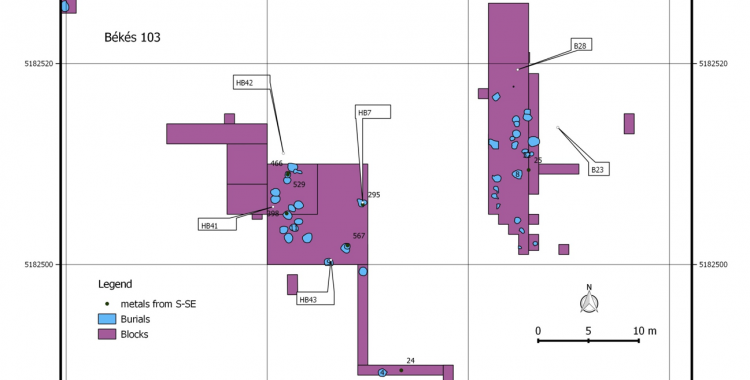 We also looked at the types of graves that contained bronze, and found that they mostly belonged to infants or young children. This could indicate something about the religious beliefs of the cemetery’s users. In addition, were hoping that we will have the chance to test some of the bronze pieces to find out more about their chemical makeup. This could help us figure out where the metal itself came from.

In the future we will continue to work with the bronze finds from Bekes 103, and hopefully will soon be able to provide more information.

← Learning From What Remains
Archaeology Illustration: How I learned to love the dot →