Have you ever wondered how people in the ancient world got their hands on the materials they used in their daily lives? Sometimes we look at the people of the past, and assume that they made everything they needed themselves. The thing is, this is usually not the case. Just like us humans today, the people of the past usually worked very hard, and could do a few jobs very well, but weren’t able to make everything they needed. So what they couldn’t make for themselves, they would trade in from other places. The “Death Metals” team spent this season researching the trade networks that once connected the Körös River region (particularly Békés county) to other, distant peoples. 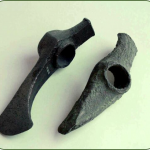 Doing this involved a lot of reading and multiple excel tables. We looked through regional topographical survey data (in the volumes of the Magyarország Régészeti Topográfiája [Hungarian Archaeological Topography]), archaeological reports and the inventory of the Munkácsy Mihály Musem (Békés County Museum) in order to find what metal finds have been found in the area. Virág focused on stray finds and cemetery/burial contexts in order to limit the amount of time spent looking for artifacts. Anna also looked at burials and stray finds, but she also needed to look at places where people lived, the settlements. We collected our data into a sort of database in Excel spreadsheets in order to make the data more organized and easier to work with. We plan to plot where the metal finds were discovered on maps in order to reconstruct how widespread metals were in the region, and to see whether those find densities change over the course of time. We expect them to be somewhat different, owing in part to changing social structures between the Copper and the Bronze Ages, as well as the later commonality of bronze finds from settlements, which are not at all characteristic of the Copper Age.

So why the different initial data collection strategies, you ask? It all boils down to this: in order to look at trade effectively, we need to look at how these trade networks may or may not have changed over time. Virág worked with the Copper Age, while Anna worked with the Bronze Age. 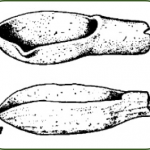 Virág focused on Copper Age copper artifacts, particularly copper axes. Though there have been some interesting gold and silver finds, too! (She’s only human – she loves gold as much as the next person!) While she did this work, she also looked a little bit at the Late Neolithic, as well. Did you know that copper appears in the Carpathians as early as the 5500’s BCE?1 She sure didn’t before she started doing this research.

Anna focused in mostly on bronzes from the Middle Bronze Age, particularly on armrings and pins. However, in order to connect our work better to the BAKOTA Project, she also looked at the later parts of the Early Bronze Age (with the Ottomány culture) and earlier parts of the Late Bronze Age, as the Békés 103 cemetery seems to span all of that time. She also worked with objects related to the casting of bronze, such as molds. One of the sites even had a casting ladle, which is what the molten metal is poured out of!

We don’t really have results quite just yet, but we expect to be able to use everything we’ve learned to better understand the lives of the people buried at Békés 103. Where did their metal come from? Were they close to major trade areas? We’ll also be able to see how trade changed between the Copper Age and the Bronze Age in this area.

← Perspectives from a BAKOTA alum
OT student digs for answers →