Browse: Home   /   Getting to the Core of Archaeology Clay and Ceramics Reveal Bronze Age Trade Routes

Think for a second about soil. Yes, the gritty stuff below your feet that you never pay attention to. Sometime when you’re by a river, pick up some wet river soil and roll it in your hands until it’s nearly dry. If you’re lucky, the soil will be full of clay. If that’s true, you’ll be able to mold your clay without it breaking. It turns out that people have been using this type of clay for thousands of years to make ceramics. As a member of the BAKOTA project, it is my job to find out where people from the Bronze Age found clay to make their ceramics.

A large part of the BAKOTA project is to determine the Bronze Age trade routes near the Békés 103 cemetery that has been excavated. Finding what soils were used to make ceramics can help us figure that out. Last year, Ashley Cercone and Dr. Mark Golitko began work on this project. They spent their time taking soil and ceramic samples throughout the Békés county of Hungary. This year, I will be helping Mark to continue this project. 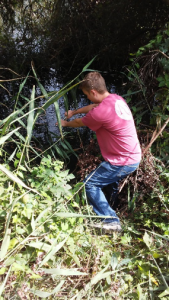 Taking a soil core from a paleomeander

Determining where ceramics came from relies on the provenience postulate. This states that the chemical variability between locations should be less than the chemical variability within a site. Basically, this means that we can figure out where a ceramic came from if the ceramic’s chemistry is similar to one place, but not to others. In order to determine if the Békés 103 ceramics came from the area around the cemetery or were traded in, the ceramics must be compared chemically to the rest of the region. That’s where I come in. This season, I will be helping Mark take soil cores throughout Eastern Hungary. We will chemically compare the soils from different parts of Eastern Hungary to the ceramics from Békés 103.

However, we can’t take soil from any old place. Ceramics are made with clay which is often found on the banks of rivers. To find clay that Bronze Age peoples may have used, I have to use GIS and Google Earth to find old river meanders called paleomeanders. Although they were once major rivers, paleomeanders may be streams or oxbow lakes today; in addition, many paleomeanders have completely dried up. Since paleomeanders are not active rivers, they tend to have less pollution than modern rivers and are therefore more chemically similar to what was used during the Bronze Age.  Hence, we try to take soil cores from the paleomeanders we find.

Once we get back to the United States, we will run chemical analysis on these samples and the Békés 103 ceramics. We’ll be using Laser Ablation-Inductively Coupled Plasma-Mass Spectrometry or LA-ICP-MS. The general premise of LA-ICP-MS is that we use a laser (hurray for lasers!) to cut off a very small section of the soil or ceramic. Using plasma, this section is then torn apart into individual ions. These ions then travel through a series of magnets that separate the ions based on size. Once separated, we can detect different types of ions and determine how much of each element is in the sample. Granted, this explanation is very simplified, but I hope it gives you a rough idea of how this instrument works. Using statistics and LA-ICP-MS, Mark and I will compare the chemical composition of the soils and ceramics. Hopefully, we can use this data to figure out if the ceramics found at the Békés 103 site were made on site or elsewhere.

Should Mark and I find out that ceramics were being traded into the Bronze Age Békés region, this could expand our knowledge of existing trade routes that existed at the time. Yet, we may find the exact opposite: that the ceramics excavated Békés 103 were made locally. No matter what the outcome, I am excited to explore this all the possibilities.

For more information on this subject, look at some of these blogs: