DO Judge a Bone by its Color!

The grass is green. The sky is blue. The world is a mixture of rainbows with colorful hues. We beautiful humans are graced with the vision and vibrancy of color. Living or not, color will always be relevant to us. In terms of the Békés 103 cemetery, I analyzed the bone color of people who were cremated from the Bronze Age. This is incredibly important in order for us to understand how people were treated when they were buried. The treatment of the dead can give us noteworthy indications of what life was like back during the Bronze Age. A great way to analyze that would be to look at the color of the burned human bone. 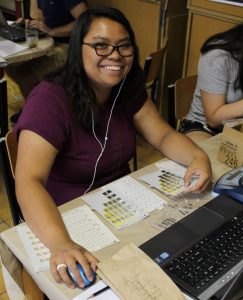 Right now, you are probably thinking, “What do bone color and people of the past have in common?” This question can be answered in many ways! The way I look at this question in my research is how hot the fire was when the body was cremated. I can estimate the temperature of the fire based on what color the bone was after it was burned! How? Famous researchers, Pat Shipman and her colleagues, conducted an experiment in 1984 on goat and sheep bones and burned the bones at specific temperatures; this allowed them to be able to compare the temperature of the fire and the color of the bone after it was burned at that certain temperature. This experiment is super helpful to my experiment because I can use their results as well as other experiments on burned bone color to help me analyze how hot the fire was when the people of the Bronze Age in Hungary were cremated.

Shipman and her colleagues used the Munsell Color Charts to observe color; the Munsell system is made up of a lot of color swatches used to study color from an objective point of view. This would allow the color data to be as consistent and as unbiased as possible. Shipman and her colleagues’ experiment results indicated that bone burned at a high temperature, about 900°C, produces white bone, also known as calcined bone (no more organic material left in the bone!); with the order of burned bone ranging from white-tan, black, to grey, and then to the calcined white, it is a good way to estimate how hot the fire was when the bodies were cremated. 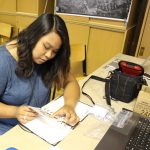 I am interested in studying whether or not the bones from certain cremations are calcined, which would mean that the fire was really hot. I want to see if there is a connection between how hot the fire of a cremation is and the social status of the person being cremated, specifically if there is inequality between the way infant/children/adolescents (called “subadults”) are cremated and the way adults are treated. A really hot fire would need to be tended to constantly which requires a lot of energy; this can relate to the fact that a cremated body that had a high percentage of their bones calcined had a higher social status.

I suspect that there may be some differences in the way subadults and adults were treated when they were traditionally buried and may have different calcination percentages; I think this because there has been evidence found that subadults and adults had differing artifacts (either ceramic mugs or jugs with subadults and ceramic jugs with adults) buried with them. If what I suspect is to be true, the research would indicate that sub adult burials and adult burials were conducted differently and unequally!

Since I am only working on a sub-sample of the Békés 103 cemetery, it would be really interesting to see if there are other indications of inequality among the cemetery besides age, like whether or not certain human cremations in the cemetery had higher percentages of calcination between different areas within the cemetery itself!

← What’s so Dense about Crystallinity?
Touch through time and space – ceramics coding and spatial patterning as survey methods →