What if you had the opportunity to tell someone’s story? Through the BAKOTA project, we have the chance to do that for a Bronze Age society in eastern Hungary, by investigating material culture and spatial relationships of the Békés 103 cemetery (Fig. 1). The aim of the BAKOTA project is to answer questions regarding the emergence of technological advances, such as agriculture and metallurgy within a Bronze Age society. Traditionally, scholars viewed the Bronze Age as a period powerful, centralized chiefdoms controlled their surroundings and maintained political and economic power. However, these theories are being questioned by another line of researchers, who theorize the existence of small, autonomous settlements and a lack of striking hierarchy or social inequality within these societies. 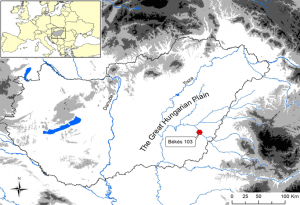 Fig. 1 Hungary and the Békés 103 cemetery on the Plains. (Map by courtesy of Paul R. Duffy)

The Békés 103 site in eastern Hungary is being researched to find answers to the social structure and function of the community by combining different techniques from multiple disciplines in order to gain a holistic view of the society. Our hope is to be able to understand some aspects of these people’s lives; to give them a voice, and tell their story. The regional survey, in particular, is the type of investigation we will use to gain insight into this past society. We combine the use of Geographic Information Systems (GIS), ceramic coding, and geophysical techniques in order to compare Békés 103 to others in the region.

The BAKOTA 2016 field season is building on prior research on the Békés 103 cemetery and the surrounding areas; those excavations yielded high frequencies of ceramics (Fig. 2). We want to compare what was found at the surrounding sites to the Békés 103 cemetery, in order to recognize stylistic similarities, and determine which sites were contributing to the Békés 103 cemetery. In addition to a ceramic analysis, GIS will be used to make maps and conduct a social network analysis. A social network analysis helps us to determine what pathways were most efficient between sites and Békés 103. Social network analysis also pulls heavily from the human geographer Walter Christaller’s central place theory, which helps to identify central places that serve surrounding areas in site groupings; in our case the central place would possibly be Békés 103 (Fig. 3). In this example, the center site is the main site and all others are the 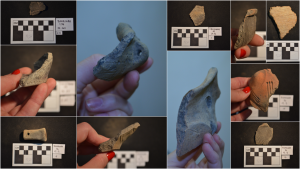 periphery sites. In this case, we could ask if the cemetery could possibly be the main site and determine what sites would have contributed to the cemetery by their location within the periphery. GIS, when used with ceramic analysis can help to predict which sites were contributing to Békés 103 and helps us to systematically select sites to excavate based on hard data.

Our hope is that this season will lay groundwork for future seasons to expand upon. When attempting to explain the past without 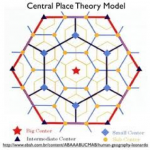 written records, one needs all data that can be compiled to build a solid case. This season is just the beginning of the regional survey, so while the survey is in its preliminary stages, it is still of the utmost importance.

The combinationof ceramic and GIS analysis is only a small portion of the survey. In the future, we would like to conduct pedestrian, and possibly some geophysical survey, as a step 2 before doing actual excavations, in an effort to be more efficient with our excavations.