Measuring what (C)remains at Békés 103!

What do most people think of when they hear about an archaeology dig at a cemetery site? For me, it used to be inhumations: (NPR ). As it turns out, Békés 103 has far more cremated burials than inhumations. The cremated remains, or cremains, were buried either within an urn, or scattered with small empty vessels marking the grave. 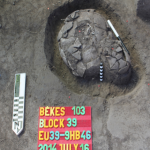 For several decades, cremated remains were disregarded and even thrown out before in-depth analysis because they were thought of as far more useless than intact bones. Luckily, at BAKOTA we are making full use of those cremains

In previous work, researchers have found that modern cremains weigh about 1000-5500 g, but that range has a lot of variation between populations. This variation could be due to the age of the deceased person, their sex, their body mass, diseases or trauma, or the heat of the fire. Archaeological studies in Europe have found a range of about 100g to 3000g, with prehistoric cremains generally being much lower in weight than modern cremains. If you want to think about how heavy those cremains are, remember, a coffee mug comes in at about 250 g, while a Macbook is about 1700 g, and a brick is 2000 g.

Burned bones tend to shrink, warp, and break into fragments during the burning process.  Cremains can be collected and distributed in a grave area, to family members, or placed into a single or many urns. Over time, the graves can be subject to animal burrowing, soil erosion, compression, or disturbance by farmers. Cremains can be so disfigured compared to traditional bones that bioarchaeologists have an insider tip on differentiating burned bone ceramics and stones: http://www.smithsonianmag.com/science-nature/bone-vs-stone-how-to-tell-the-difference-62895060/?no-ist  (Make no mistake, I have NOT done this, and do not recommend it, but it has happened before!)

My project this summer is a continuation of what I began working on with the BAKOTA project during the summer of 2015. I am continuing on weighing cremains from each of our burials and taking their volumes using a scale and volumetric flask. Last year, I found that the sex determined by using weight was the opposite of the sex we found using close osteological analysis of the cremains. This result was the complete opposite of what we expected and I wanted to delve deeper into why that might be this summer! Also, one of my mentors, Laci Paja was able to get a sample from another Bronze Age Hungarian site, Csanytelek Palé, so I have been able to weigh and get volumes for a comparative sample as well! 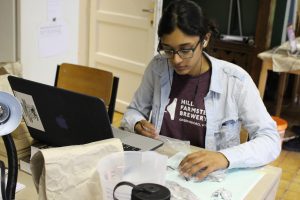 With the help of my mentors, I hope to glean information like the age at death, sex, and minimum number of individuals present in each of the graves this summer. I would also like to see if the weight of the cremains correlates with the preservation level of the urn the cremains were housed in. Determining such demographic information will allow for my project’s results to add to many of the other student projects here at BAKOTA—for example, someone might be able to correlate a certain kind of urn with that of an infant or female, or even tell if the all of the individual’s bones were placed in their final resting place. These small pieces of the puzzle coming together are crucial for our overall understanding of the Bronze Age Hungarians who buried their dead at Békés 103!